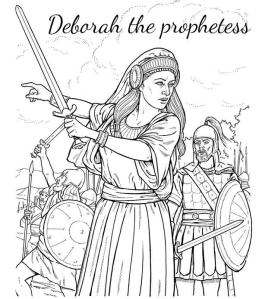 Deborah the prophetess – Judge has been cited in this article as a prime example to boost our confidence in God’s spoken word and watch the amazing results.

Deborah placed her confidence in Yahweh Elohim, the God of Israel, because she heard from Him and obeyed Him. She trusted in God alone and His plan for victory.

Consider, if the Lord has spoken will He not show up, will He not bring His words to pass? He will surely keep His Word. His promises are Yes, and Amen! Isaiah 46:11; Numbers 23:19. 2 Corinthians 1:20. The Master says: “My sheep hear My voice and they follow Me.” John 10:27 – All we need to do is follow the Lord closely, follow-after His Will – His ready plan for our lives.

Deborah did exactly that – she followed God and obeyed His command. This brought deliverance and victory to the Israelites. The battle was won, the Canaanites were defeated. She trusted in God and had confidence in His Word. She stepped into her calling as a prophetess, spokesperson, before the leader – ruler, with the message God had given her, assuring him of success and capture of the enemy. Judges 4:4-7

Deborah, the prophetess, was a judge of Israel. She held court between Ramah (elevated) and Bethel (house of God) in Mount Ephraim where Israelites came from all over the country so she could rule their cases. Deborah was also given the title of prophet, an acknowledgement that she was inspired by God in ruling the Israelite community. So we see that in addition to being a judge she was a prophetess, used to win wars, battles, sing victory songs, lead the people out of enemy-clutches, deliver the oppressed, lead as God’s spokesperson, speak to rulers and leaders, prophesy-speak as an oracle of God. She sang a victory song giving praises to the God of Israel Judges 5:1-5.

As Deborah would sit under the palm tree between Ramah and Bethel in the mountains of Ephraim and receive insight and inspiration, likewise where we sit and pray does have great significance.

This sharing is meant to encourage all Christians, especially women to place their confident trust in the Lord. From Deborah we learn that God can accomplish great things through people willing to be led by Him. Trusting in God can make the ordinary in our lives extraordinary. We can expect God to bring us before great, powerful, influential people in society, at our workplace, marketplace or amidst family members to deliver a word of encouragement, speaking confidently as God has spoken to us.

This site uses Akismet to reduce spam. Learn how your comment data is processed.

For details, drop an email to info.evsopi@gmail.com.

3. Please check out the new Prophetic audio teachings section by Prophet Tony Mathias at the main header sections of this page 👆.

Team EVSOPI invites you to visit this website from time to time.

We are committed to providing regular updates for Prophetic teaching and videos on this website.

Team EVSOPI encourages you to share this website with family, friends and those with a growing love and desire for the Prophetic.